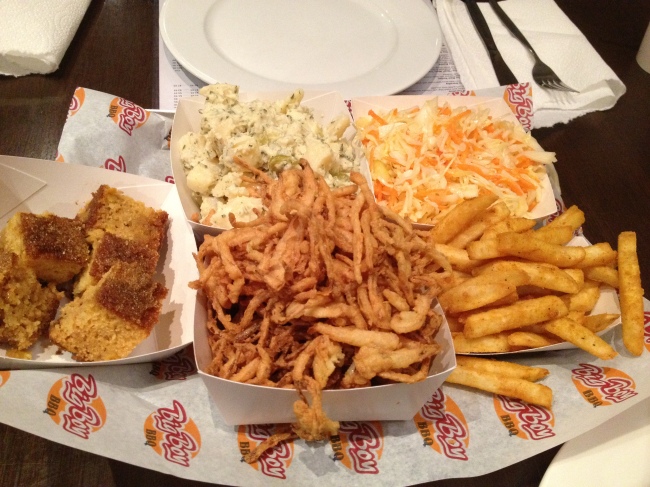 Big Boy Smoked BBQ Meat Platter – beef brisket, pulled pork scotch fillet, pulled lamb shoulder, beef pastrami, ½ rack of pork ribs, ½ rack of lamb ribs and chicken wings. So this menu option comes with 3 jumbo sides but for some reason we got 5 sides (not that I’m complaining).  The sides we got were crunchy chips, onion strings, coleslaw, potato salad and corn bread. Now the menu said that this platter could feed between 1-6 people. Imagine one person eating all of this by themselves. Yikes!

So all the meat at this place is slow cooked and as a result has a salty smoky flavour.  Apart from the pulled pork scotch fillet (which was quite spicy compared to the rest of the meat), everything tasted very similar after a little while once it was covered in the sweet BBQ sauce. As for the sides, the crunchy chips were extremely crunchy (in a delightful way), the onion strings were mostly just deep fried batter, the coleslaw was fairly average, the creamy potato salad had a nice tanginess to it due to the pickles and the corn bread was quite sweet (which I suppose is normal for cornbread) = Not bad

Condensed milk and banana ice cream – came prepackaged in a little container and tasted like condensed milk mixed with banana Nesquik (ie. had a very artificial taste to it) = Not bad

The place to go to if you want to have a break from eating vegetables and instead indulge yourself in a lot of meat. Although the food here is not exactly amazing, the concept of having slow cooked food that is served fast is different and interesting. (Their meat is smoked at low temperatures for up to 16 hours, hence the food isn’t hot but warm when it is served). The staff here are young and friendly and the atmosphere is very casual.